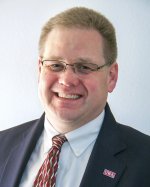 J. Thomas Seddon IV is the Director of Bands at Washburn University in Topeka Kansas. Prior to joining the faculty at Washburn, he was the Orchestra and Wind Ensemble Director at the University of Wisconsin La Crosse. Dr. Seddon has a Doctor of Musical Arts from The Hartt School, University of Hartford. In addition, he holds a master of music from The Hartt School and a bachelor of science in music education from Lebanon Valley College of Pennsylvania. Seddon has studied conducting with Glen Adsit, H. Robert Reynolds, James F. Keene, Jerry Junkin, and Michael Heithcock. Prior to UWL Seddon was the Director of Bands and instrumental music education at Central Connecticut State University in New Britain, Connecticut. Seddon appears as a clinician and presenter for conferences, workshops and as an adjudicator regionally and nationally. He is published in the Journal of Band Research and The Instrumentalist. At Central Connecticut State University the Wind Ensemble performed at The Connecticut All-State Conference four times and the Chamber Players at the Eastern Region National Association for Music Education Conference in 2011. Dr. Seddon was the recipient of the Central Connecticut State University 2009-10 Excellence in Teaching Award. While at UW-La Crosse Dr. Seddon brought the Wind Ensemble to the College Band Directors National Association – North Central Conference in 2016 and 2018. In 2017 The UWL Wind Ensemble was one of ten universities to have a recording played at the College Band Directors National Association - National Conference in Kansas City Missouri as part of the ‘Small Band Showcase’. From 2012 - 2016 he was also the associate conductor of the La Crosse Symphony Orchestra, La Crosse Wisconsin.
Chairperson
Eric Stambaugh
Buhler HS
611 N. Main St
Buhler, KS 67522
w: 620-543-2255